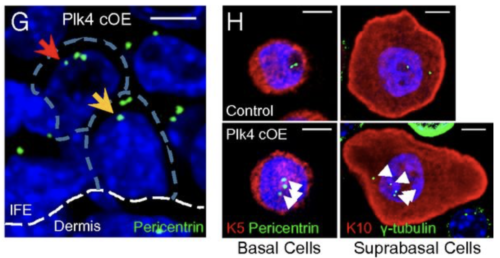 Epidermal Development, Growth Control, and Homeostasis in the Face of Centrosome Amplification

Proceedings of the National Academies of Science

As nucleators of the mitotic spindle and primary cilium, centrosomes play crucial roles in equal segregation of DNA content to daughter cells, coordination of growth and differentiation, and transduction of homeostatic cues. Whereas the majority of mammalian cells carry no more than two centrosomes per cell, exceptions to this rule apply in certain specialized tissues and in select disease states, including cancer. Centrosome amplification, or the condition of having more than two centrosomes per cell, has been suggested to contribute to instability of chromosomes, imbalance in asymmetric divisions, and reorganization of tissue architecture; however, the degree to which these conditions are a direct cause of or simply a consequence of human disease is poorly understood. Here we addressed this issue by generating a mouse model inducing centrosome amplification in a naturally proliferative epithelial tissue by elevating Polo-like kinase 4 (Plk4) expression in the skin epidermis. By altering centrosome numbers, we observed multiciliated cells, spindle orientation errors, and chromosome segregation defects within developing epidermis. None of these defects was sufficient to impart a proliferative advantage within the tissue, however. Rather, impaired mitoses led to p53-mediated cell death and contributed to defective growth and stratification. Despite these abnormalities, mice remained viable and healthy, although epidermal cells with centrosome amplification were still appreciable. Moreover, these abnormalities were insufficient to disrupt homeostasis and initiate or enhance tumorigenesis, underscoring the powerful surveillance mechanisms in the skin.