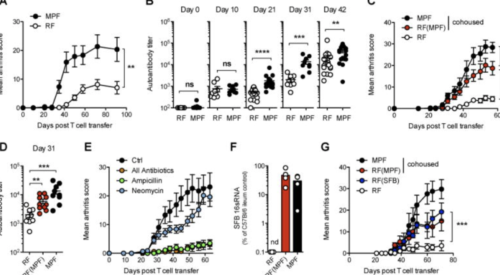 Differences in gut commensal flora can dramatically influence autoimmune responses, but the mechanisms behind this are still unclear. We report, in a Th1-cell-driven murine model of autoimmune arthritis, that specific gut commensals, such as segmented filamentous bacteria, have the ability to modulate the activation threshold of self-reactive T cells. In the local microenvironment of gut-associated lymphoid tissues, inflammatory cytokines elicited by the commensal flora dynamically enhanced the antigen responsiveness of T cells that were otherwise tuned down to a systemic self-antigen. Together with subtle differences in early lineage differentiation, this ultimately led to an enhanced recruitment of pathogenic Th1 cells and the development of a more severe form of autoimmune arthritis. These findings define a key role for the gut commensal flora in sustaining ongoing autoimmune responses through the local fine tuning of T-cell-receptor-proximal activation events in autoreactive T cells.