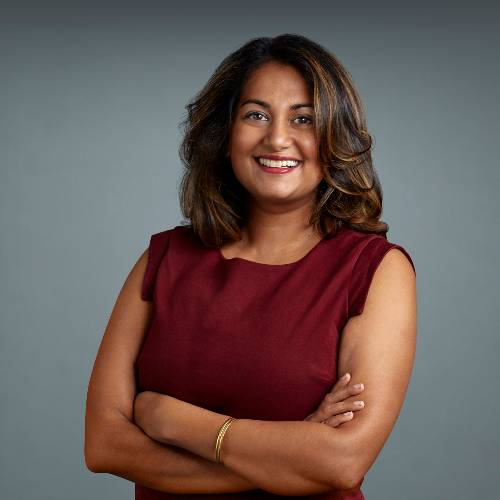 Shruti received her B.S. in Cell and Molecular Biology from the University of Maryland, College Park. After which she worked as research assistant at the Naval Medical Research Center studying traumatic injury and autoimmune onset. Shruti then matriculated into the University of Pennsylvania-National Institutes of Health Graduate Partnership Program and obtained her Ph.D. in Immunology under the mentorship of Dr. Yasmine Belkaid and in collaboration with Dr. Julie Segre. During her doctoral studies, she discovered that normal bacteria living on our skin, known as the commensals, educate the immune system and help protect us from harmful pathogens. Her work unveiled how immune cells in our skin work with our microbial partners to prevent disease and has opened the door for microbiota-based therapies in the skin. For her postdoctoral studies, Shruti joined the lab of Dr. Elaine Fuchs at the Rockefeller University as Damon Runyon Cancer Research Fellow. Here she found that epithelial stem cells can harbor a memory of inflammation which boosts their regenerative abilities. This finding extended the definition of inflammatory memory beyond immune cells bringing about a seachange in our current view of how tissues remember inflammatory encounters.

Shruti is a strong advocate for increasing diversity in science and promoting the advancement of underrepresented and marginalized groups. For her research and advocacy Shruti has received numerous accolades including the NIH Women’s Scholars Award, the Regeneron Award for Creative Innovation, the L’Oréal For Women in Science Award, the Damon Runyon Dale F. Frey Award for Breakthrough Scientist, and the Sartorius, Science Prize for Regenerative Medicine and Cell Therapy, the International Takeda Innovators in Science Award, Pew-Stewart Fellow, Packard Fellow, NIH Director’s New Innovator Award and the New York Stem Cell Foundation Robertson Investigator Award.